This October, BCNA will recognise the experiences of men diagnosed with breast cancer as we launch Australia’s first Male Breast Cancer Awareness Day on 20 October.

As Male Breast Cancer Awareness Week 2016 is winding down, I think that it would be fitting if we were all reminded as to how the idea of designating the third week of October as MBC awareness week originated.

Male Breast Cancer Awareness Week Tribute Video I prefer to stay in the background but I am so honored that Herb Wagner created this tribute to Joe and Brandon. Thank you so very, very much! Cathy Reid – “Out of the Shadow of Pink”.

Florida House of Representative Robert Schenck introduced HR Resolution 9105 to establish October 17th to 23rd as Male Breast Cancer Awareness Week in the State of Florida.  A signed copy of the original resolution will be presented to Herb Wagner in September 2011. 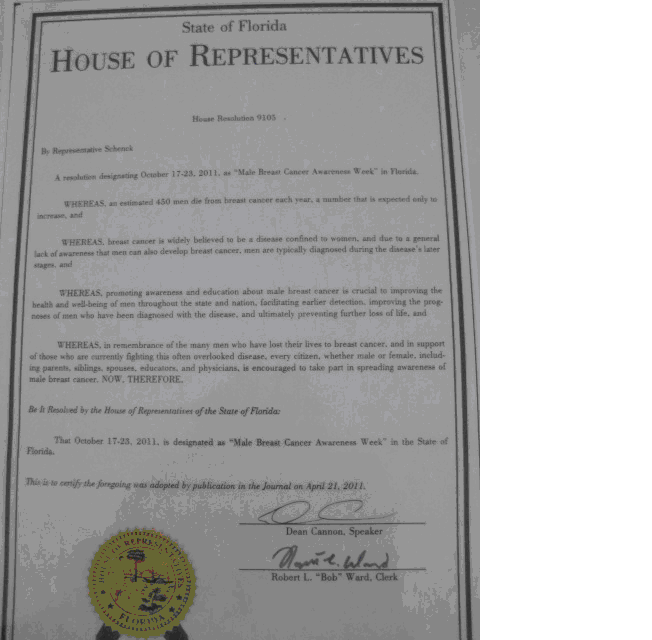 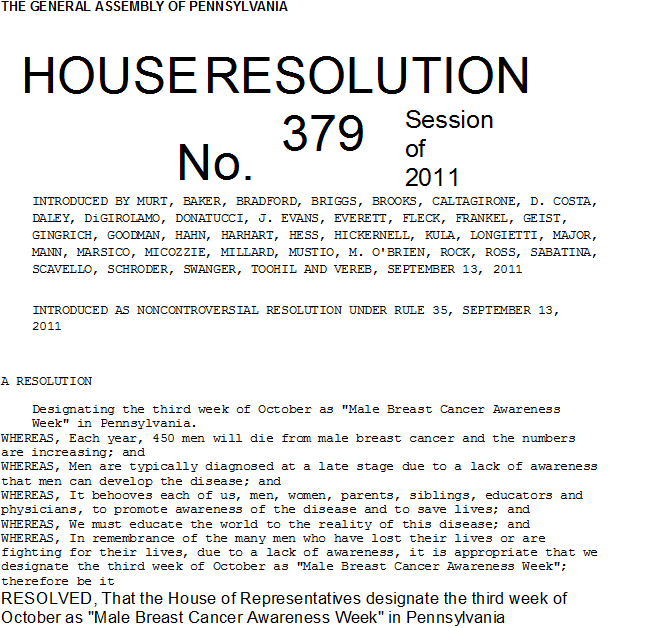 Pennsylvania House of Representative Thomas Murt introduced HR Resolution 985 to establish the third week of October as Male Breast Cancer Awareness Week in Pennsylvania.  A signed copy of the original resolution was presented to Chris Koniers and his wife on October 21, 2010. 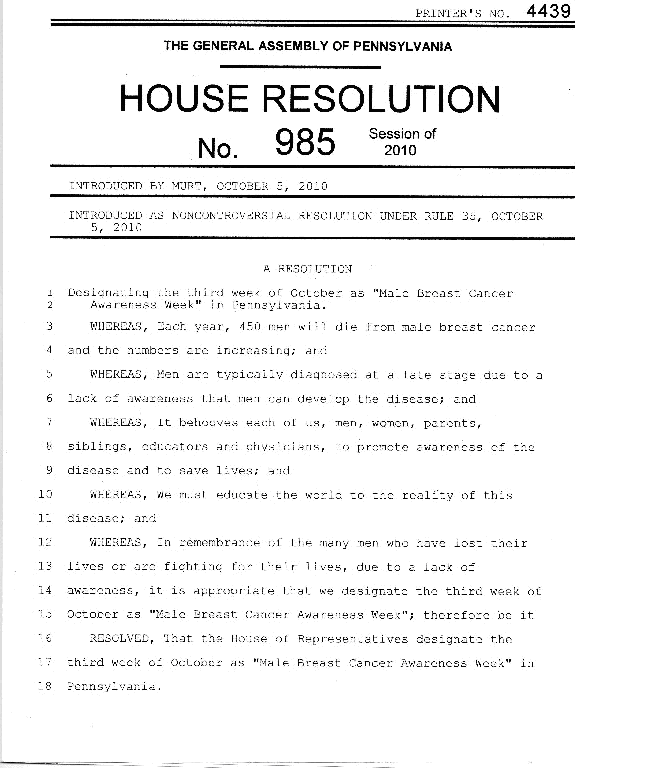 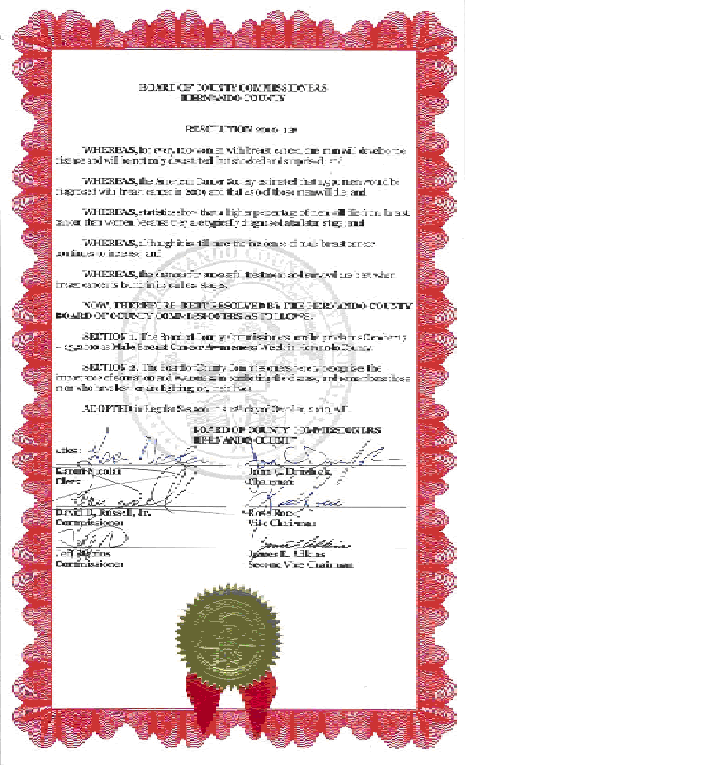 Proclamation for the Third Week of October as MBC Awareness Week

In 2005 the American Cancer Society estimated that 1200 men would be diagnosed with male breast cancer; the estimate for 2009 was 1990 men.   The Canadian Cancer Society estimated approximately 200 men would be diagnosed with MBC in 2009. Statistics show that a higher percentage of men will die from breast cancer than women because they are typically diagnosed at a later stage.  Although it is still rare, the incidence of male breast cancer continues to increase.  Most men are still sadly unaware.  The chances for successful treatment and ultimately survival are best when breast cancer is found in its earliest stages.  In order that the same opportunity be afforded to men it is vital that we create a Male Breast Cancer Awareness Week.  We must educate men now!

WHEREAS, each year 450 men will die from male breast cancer and the numbers are increasing.  Men are typically diagnosed at a late stage and we believe this is primarily due to a lack of awareness that men too can develop the disease.

WHEREAS, it behooves each of us, men, women, parents, siblings, educators, physicians and citizens to promote awareness of the disease and possibly save men’s lives.

WHEREAS, we must educate the world to the reality of this disease, and

WHEREAS, in remembrance of the many men who have lost their lives or are fighting for their lives, due to a lack of awareness, it is appropriate that we designate the Third Week of October as Male Breast Cancer Awareness Week. 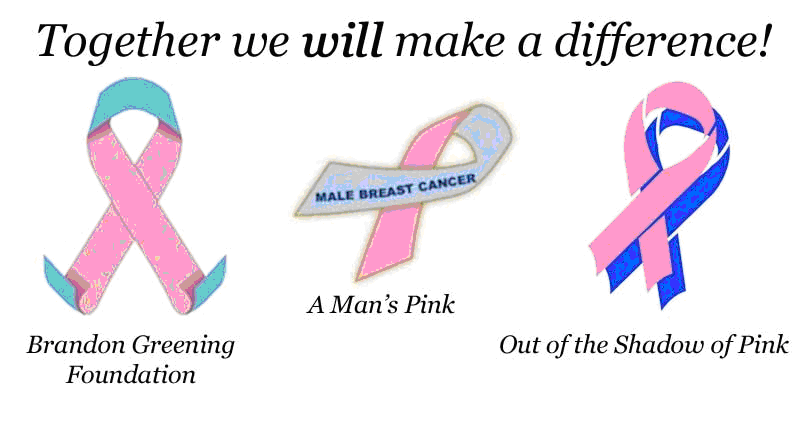 I gave the following presentation in Brooksville Florida and we have received overwhelming support.  After my presentation to the Hernando County Legislative Delegation, the next day we received support from the Hernando County Commissioner, David Russell and more recently received support from Florida Senator Robert Schenck who will introduce this resolution to the Florida House of Representatives next session.  As well, Florida Congress woman Ginny Brown-Waite will be supporting and presenting a similar resolution to the United States House of Representatives (Federal) next session.

My name is Herb Wagner and I am the founder and President of “A Man’s Pink”.  I am also a 5 year male breast cancer (MBC) survivor.  While very rare, approximately 1% of all breast cancer is diagnosed in men.  In other words, approximately 2000 men in the US and about 200 men in Canada will be diagnosed with breast cancer this year alone.  As a result, it is estimated that this year, 450 men in the US and around 45 men in Canada will die from this disease.  When the same type and grade of tumor is diagnosed at the same stage in either men or women, the prognosis and treatment options are very similar.  However, the overall prognosis for men is not as good as for women because more often than not, MBC is diagnosed at a later, more advanced stage.  This is most often due to the fact that many men are unaware that this is a disease that can also affect them.  As well, men in general, are reluctant to seek medical advice, especially regarding a breast issue.  Consequently my mission has become to increase MBC awareness.

Cathy Reid – Executive Director of Out of the Shadow of Pink,  who is currently working alongside the Brandon Greening Foundation requested my assistance to join them in their mission to establish Male Breast Cancer Awareness Week (see Proclamation) as the 3rd week in October.

Cathy Reid lost her husband Joe at the age of 47 to MBC in September 2008.  Brandon Greening is 38 years old and currently battling stage IV MBC. Herb Wagner is currently a 5 year MBC survivor.

Your ticket for the: MBC Awareness Week