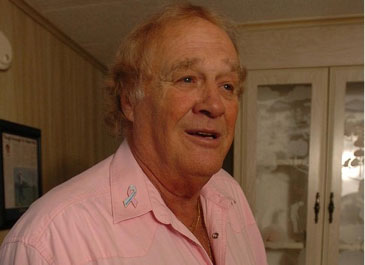 I Made It: ‘I felt alone in trying to deal with this disease’
Herb Wagner, 68, Brooksville and Canada

To increase male breast cancer awareness to increase survival rates. To “Add a Little Blue to the Pink.”

After my modified radical mastectomy in March 2005, the only information I could find on the Internet regarding breast cancer was related to women. There was a lot of information and support both on- and off-line for women, but nothing available for men diagnosed with breast cancer. I felt alone in trying to deal with this disease.

A very dear friend of mine, Barbara Francis of Fairfield, Ohio, was always giving back to others, and in 2006, she helped me realize that having such a rare disease put me in a very special position. By talking publically about male breast cancer, I could increase awareness and help other men deal with the disease. In 2006, I began my mission to increase awareness. I am now a 6 1/2-year survivor, and I continue to spread the word.

In 2006, I began my journey to increase male breast cancer awareness by purchasing a Wrangler “Tough Enough to Wear Pink” western shirt and speaking wherever and whenever I could. In July 2009, I launched www.malebreastcancer.ca, which provides information and support to other male breast cancer patients, survivors and their loved ones. The website currently averages about 70 hits a week. I am also the founder and president of “A Man’s Pink”; a not-for-profit advocacy organization that supports our website. A Man’s Pink was incorporated in Canada in August 2011.

The current survival rate for men diagnosed with breast cancer is about 79 percent, compared to 87 percent for women with a similar diagnosis. There are several reasons for this. The male breast is much smaller and the cancer tends to be more aggressive. The lack of awareness in men causes many tumors to go undetected for a longer time in men. Many men are unaware that breast cancer is a disease that can affect them, and men, in general, are reluctant to seek medical advice, especially regarding a breast issue. We have to overcome this and educate men to get any changes in their breasts examined immediately.