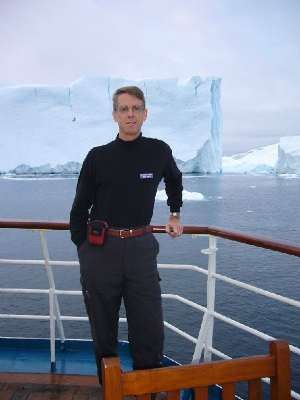 Male Breast Cancer MUST Escape from the Sea of Pink

I am a 63 year old retired physician in Ottawa Canada.

In October 2007 at age 55, I found a lump on my chest wall. Some distance laterally to the breast. Saw my GP and was diagnosed with likely right breast cancer. I had a needle biopsy in December… was very painful so they stopped after one pass instead of 8. (I have a heightened sensitivity to pain after a neck fracture age 24 with residual spinal cord cyst.)

The result was infiltrating lobular carcinoma with focal perineural infiltration

I was offered a choice of Tamoxifen or Arimidex (anastrazole). I was warned that with my chronic pain condition the Arimidex could worsen the pain. So I chose Tamoxifen, which I took intermittently for a year. Side effects were decreased libido, fatigue, and superficial phlebitis feet. Also worsening depression.

We discussed chemo, but with maybe 5- 8 % increased 5 year survival with 1% risk of death, I declined. Radiation was not recommended.

Years later I discovered this website and spoke to Herb Wagner. He said he never met a man who tolerated the tamoxifen a whole 5 years without experiencing some of the major side effects.

My oncologist was good but she had limited experience with MBC.

I was fine on no treatment and was discharged from follow up in late 2013.

But I had developed new back and rib pains which were thought to be related to my chronic pain condition. However my chiropractor was concerned so I convinced my pain doc to sign the MRI of thoracic spine requisition that I filled out (I am a physician).

It showed widespread bony mets of Thoracic spine. I had a good cry in my chiros office when he read me the bad news. I knew it was a death sentence for me. Going back to the same oncologist, I had some anger at being disbelieved by her and my chronic pain physician. I was given 2-3 years to live.

I have been through a course of chemo and radiation. So much of my bone marrow is involved that I need transfusions every month, have chronic low white and red cells and platelets. I recently had a bowel obstruction from spread to the abdominal cavity and intestine. I have recurring ascites (fluid in peritoneal (abdomen) cavity. And severe lymphedema of the legs.

I was not able to qualify for a study with IBRANCE (palbociclib) because I am male. Same story with other studies. I now access it on compassionate grounds.

I firmly believe that had I chosen Arimidex over tamoxifen initially I would have another 10 years without recurrence. I did end up on Arimidex in 2014 with no side effects.

The other factor in my story is that I went through a divorce and toxic child custody battle about the time I was diagnosed. Which I lost. I know 2 other physicians in Canada who died of aggressive cancers through the same circumstance. Massive stress of losing your children will hammer an immune system.

And you need a good one to fight cancer.
So I wish I had found Herb Wagner at www.malebreastcancer.ca in 2008. Possibly the website was not quite up in early 2008? And I would still be taking Arimidex with good health.

My plea is for all newly diagnosed men to find a good support group and dig to get the right treatment.
I am so happy to see Dr John Boyages emerge as a specialist in male breast cancer. Even if he is in Australia.  I certainly would have asked him for a second opinion.

I likely have a few months to live if I am lucky.

I take life a day at a time and try to control negative thinking, especially the what ifs and resentments.

I do each year the MOTORCYCLE RIDE FOR DAD. It is to raise funds for prostate cancer research and awareness. But now I have to do the ride in a car with the top down. My spine does not like the bumps on Canadian roads from a bike.

It allows me to give back and who knows, some of the research has already helped me with a different disease.

Your ticket for the: Doug Hardy