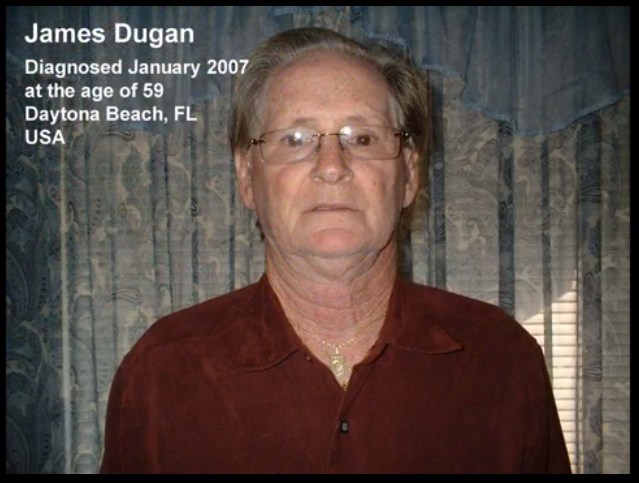 My name is James Dugan and I have Male Breast Cancer.

In early 2006 my left nipple started to get tender so I went to my doctor. He said it was from too much caffeine. So I stopped the caffeine and it started to go away.

In October the pain came back. Again I thought it was the caffeine so again I cut out more caffeine, but it got worse. Something told me it was cancer. I told some people and their reply was that it wasn’t and some said men don’t get breast cancer.

January 2nd of 2007 I went back to the doctor again and told him I had breast cancer. He did not believe me until he touched it and I came up off the table. That is when he ordered a mammogram and ultrasound. When the results came back it was positive for cancer.

On February 14th, I had surgery on the left side and on December 5th. The right one was removed. A little over half way through Chemo I had to stop. The herceptin damaged a little over 25% of my heart. I had the genetic testing done and the tumour is ER positive and HER/2 positive. This means I am prone to 5 other cancers. This was almost too much to handle and became vary depressed. My doctor had to put me on 3 different anti depressants, which I’m still on.

What is getting me through this is my ex-wife, a lady friend with stage 4 cancer who I meet at a support group, and the LORD JESUS CHRIST.

Thanks to you all.

Your ticket for the: James Dugan