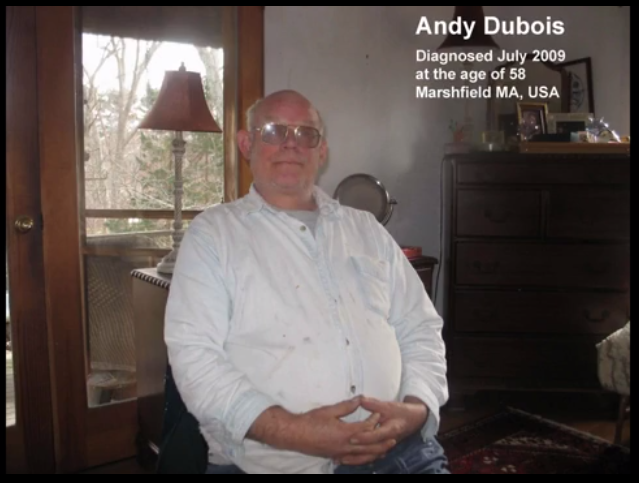 Somewhere around my 55th birthday, I succumbed to old fart-edness. My joints ached and climbing stairs made me breathless. I was fending off questions regarding my prostrate and colon. I shuffled along for a couple of years, when pneumonia landed me in the hospital for four days. Before this, I had not had even an aspirin in three years. I didn’t even have a primary care physician. Denial isn’t just a river in Africa.

This June, Marina, my wife of 36 years, noticed that one of my nipples was an “inny” (inverted). I dismissed it, figuring that I had slept on it funny. Messing around with it, trying to pop it out, I felt a small lump. Ain’t getting old fun?

July rolls around and my lungs are filling up and I am having trouble breathing. Assuming, it was another episode of pneumonia, I sought out my daughter’s PCP, Dr Kohler. She read me the riot act for evading her last year. To mollify her, I made appointments for blood work and a physical. In the last few minutes of the physical, almost as an aside, I revealed the “inny” and the lump behind it. That was July 15th. A mammogram was scheduled for the next day. The results of the mammogram led to a biopsy

I was curious but not concerned. I missed the call from Dr. Kohler on Thursday evening regarding the biopsy and we played phone tag Friday morning. Finally about 1 PM, we connected and I was informed that I had breast cancer. I was 58 years old.

I persuaded Dr. Kohler to schedule me an appointment with a breast surgeon and twenty minutes later I had an appointment. All this drama with me in my work van, stuck in Boston get-away traffic. It sounds kind of dry five months later, but at the time I could barely talk. I was terrified.

I sought refuge with my friends and family, but I still could barely say the word cancer. The following Monday, my life changed forever as I became enmeshed in the world of medicine and hospitals. CT scan, PET scan, MUGA scan and another biopsy. Thursday, I had to myself and Friday morning, July 31st, I underwent a radical mastectomy to remove Stage II B breast cancer.

I can’t say much about the surgery. I was out for most of the morning. I came to in a bed with people fussing over me. No real fuzziness, no pain, just tightness in my upper right chest and arm pit. I felt pretty darn well considering. At the time, I assumed there was local anesthetic at work here. Five months down the road it is still kind of numb. Is this the new me? Shrug.

The mastectomy lacks the importance for me that I suspect it does for women. I miss the lymph glands more from a purely practical stance. I would miss a finger or a toe worse than my right breast. I am deeply appreciative however, that breast cancer is of such importance to so many people that it is well researched and the survival rate is high, if the cancer is caught early enough, as it was with me.

I was out of the hospital Sunday morning feeling surprisingly healthy considering the shape I had been in pre-op. I was considered to be at minimal risk because my lungs were so wheezy. Whilst being breathed for, the breather guy sucked about a liter of crud from my lungs. I was breathing better post-op than I had been going in. And there was no pain! The numbness is still there.

There was nearly a month of healing between the mastectomy and the first chemo. I was to be given ACT chemo-therapy which is a fairly standard prescription in early detection? Or not? I am getting a fairly rigorous approach to breast cancer. Fine, kill it dead, dead and dead some more.

The AC part of the chemo was actually fun. Just some gas and nausea. When stuff tasted funny, I tried different foods. I ate like a hog. Oh, I’m using the patch to quit smoking during all this stuff too, by the way. The shots and the meds and the treatments. Everything combined and I was having the time of my life. I suppose it was some sort of variant of the Stockholm syndrome. I was hanging with some fine people, learning all kinds of neat stuff. I was dressing in shorts and flowered shirts, no socks. Once I got over the cancer thing, I was having and still having, by the way, a fine old time. To prove a point, I returned to work just 8 weeks after being diagnosed.

Then came Taxol. Taxol was hyped to me by my Oncologist as even easier than AC chemo. She just plain lied to me. Taxol itself is no big deal, just general weakness and fatigue. The pain comes from when your body fights its way clear of the poison and starts a crash program to restore depleted white blood cells. Two treatments and a month into Taxol, I was getting a little strung out by the pain. Driving seemed to aggravate the condition and that is what I do. Had you been riding shotgun, you would have thought I had Tourettes syndrome. As well, I couldn’t use Percocet and drive. An accident under these conditions and I’d be screwed.

I decided to go back onto short term disability on December 4th 2009. Once I made contact with the right lady, it was smooth sailing with the claim. Turns out we share the same birthday.

I have one more Taxol to go. Then a few weeks hiatus, while my body gains strength. Then comes radiation. A month’s worth. My eyes glazed over back in September when it was all laid out for me. You would think that I would have paid more attention, but I didn’t. I am not going to sweat it. What ever the doctors want is fine with me. I am a newbie. Happy Holidays, Andy
Website Builder

Your ticket for the: Andrew Dubois